When you hear that someone is ‘diabetic,’ that usually refers to the formal name, diabetes mellitus. Mellitus is the Latin word for ‘sweet like honey.’

Historically, Egyptian manuscripts circa 1500 B.C. write of a disease associated with much urine output. Indians used the word,  madhumeha (‘honey urine’) because ants were attracted to the sugary urine.

English doctor Thomas Willis (1621-1675) is credited with observing and publishing the fact that the urine of diabetes mellitus tastes sweet. It’s rather gross, but he described it as being “wonderfully sweet as if it were imbued with honey or sugar.” (See Figure 1.)

Hey! Bring me that urine! I need to taste it!

Figure 1. The Sweet Urine of Diabetes Mellitus. It’s not normal to spill the sugar, glucose, in your urine. If the urine spills sugar, it tastes sweet. But no one tastes it anymore. Instead, we use a stick to detect sugar, and dip it in the urine sample.

The other form of diabetes is insipid, meaning ‘tasteless’ in Latin. It’s tasteless because it has nothing to do with blood sugar or sugar in the urine. This condition is known as “DI,” for diabetes insipidus (die-uh-BEE-teze in-SIP-uh-dus), or DI.DI often goes undiagnosed and untreated, causing death in many teens with unknown or mild brain injury.

You need to know about DI, as public awareness is needed to prevent deaths after head injury.

Many doctors have never seen a patient with DI, and many people die from it, as it was never diagnosed. I only know about it because I had it after my traumatic brain injury. Twice.

How does DI happen after head injury? The head bangs or the brain swirls, damaging the inner brain structures. One structure, the pituitary gland, sits like an apple on a stalk (See Figure 2). 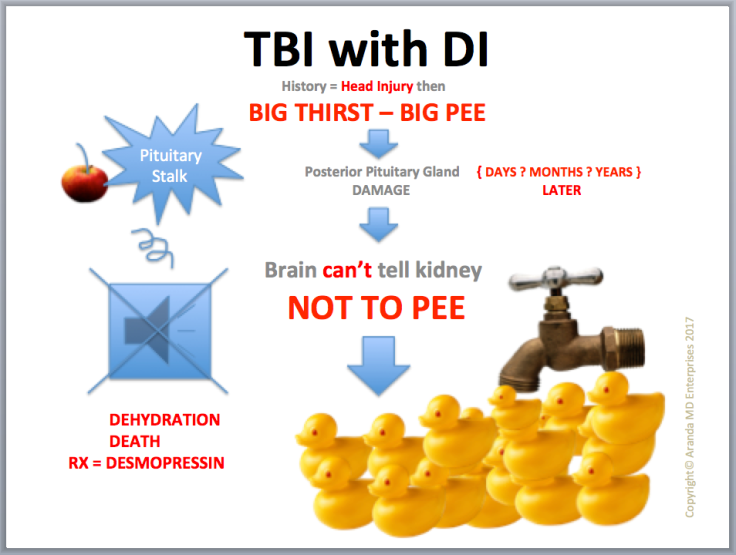 The Pituitary-Hypothalamic Tract. When the head is traumatized, the back of the pituitary gland can bang upon the brain’s wall, or ventricle. When this happens, it ‘knocks out’ the nerves inside. This can be the nerves of the gland, or the nerve tracts going to or from the gland to a higher control tower structure, the hypothalamus (not pictured). In turn, the pituitary talks to the kidneys (through the anti-diuretic hormone, vasopressin), telling it to hold on to water. Therefore, with damage, the person with a brain injury can’t hold water in any longer – so she pees and pees. And pees.

Because the pituitary gland receives instructions from the hypothalamus ‘talking’ to it, disruption of this communication leads to very dire consequences that can cause death.

How to Diagnose DI after a Head Injury:

I’m sorry to say that what happens next is really sad. The head-injured person becomes not only dehydrated from not retaining water; all that urine contains electrolytes like those found in Gatorade. He pees out sodium, potassium, magnesium, and lots of other minerals and all the water-soluble vitamins, too. Now the heart, muscles, and brain become affected.

In early stages of death, the kidneys begin to fail, giving the patient pre-renal failure syndrome. The dehydration and kidney failure start affecting the blood platelets, making them decrease in number; if the patient bleeds, he will keep bleeding or require a blood transfusion of platelets. If left untreated, the patient gradually, to you, would just seem to be more and more tired. Sleep overcomes with a new kind of brain fog of dehydration, electrolyte imbalance, and impending kidney failure. In all this, she may get too tired to drink and her lips may be parched.

This is not normal – now, this is an emergency.

Go Ahead -Call an Ambulance.

Call 911 or Use your Country Code.

Treatment: The definitive treatment is that patient needs brain hormone replacement. No matter which form you use, you have to get the exact dose right. Expect to over-dose and under-dose, and to run out of medication. It’s not your fault that this is a difficult management effort. You are at high risk of ‘bouncing back’ into the hospital if you are discharged too early. Your drug regimen has to be followed exactly on time, with exactly the right dose each time. It’s just one of those things to accept.

Public attention is needed to diagnose DI. It’s not uncommon – it’s undiagnosed. One of the reasons it may go undiagnosed is because of how long it takes for DI to ‘show up,’ and how fast it can lead to death before it can even be treated.

DI can be diagnosed weeks, months, years or even decades after a head injury.

If you think you know someone who could have DI, it is best to take them to see an American Board Certified doctor; the specialists who see DI most commonly include neurosurgeons and endocrinologists. Ask for a referral to see a specialist. Go ahead.

Fight for your diagnosis.

Thank you for reading my writings.

How are you Aging?

10 Health Benefits of the Low-Glycemic Diet

Chronic Metabolic Syndrome is Killing US

What does ‘Iatrogenic’ Mean?

What is a Diagnosis?

What Matters to You: Patient Advocacy

From Dr. Forrest Tennant: Hyperalgesia: No Reason to Stop or Reduce Opioids

Age 1: A Baby in the Sky for Father’s Day

Age 2: The Making of a Woman Intensivist

Age 6: Glistening in the Moonlight

Age 7: The Pigeon Boy, The Suction Bush and The Darkness

Age 9: Sitting on the Edge of a Cave

LIKE my Public Figure FB Page if you will, please!

Keep up with our Encouragement, Spirituality, and Self-written articles on social media!

…  learn all our social media SECRETS (EXAMPLE: use #Pinterest and #Hashtags!)